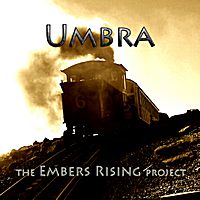 Released 2011 - Jeff mixed, co-produced, played guitar, and added some extra keyboards, bass, & FX. Umbra is essentially the solo work & songwriting of Greg Bullock. Greg recorded tracks at his home studio, and sent them to Jeff. Jeff, in turn, 'mashed, mangled, distorted, twisted' those raw tracks, as well as adding guitars & some additional 'ear candy'...and then created a final mix of that stew. It's purposefully, a very dark, brooding mix - ala Depeche Mode, David Bowie, Peter Gabriel, etc. Jeff states, "It was quite fun to do something so dark, and totally unlike 99% of the other music I tend to work on."